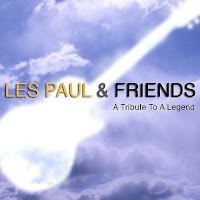 One of the most recognizable guitars in the world is the Gibson Les Paul. Guitar Gods such as Duane Allman (The Allman Brothers Band), Jeff Beck (The Yardbirds), Ace Frehley (Kiss), Billy Gibbons (ZZ Top), David Gilmour (Pink Floyd), Jimi Hendrix, Alex Lifson (Rush), Gary Moore (Thin Lizzy), Jimmy Page (Led Zeppelin), Keith Richards (Rolling Stones), Pete Townshend (the Who), and Joe Walsh (The Eagles)Ê have all used a signature Les Paul guitar at one point in their musical career. So, it is fitting that a CD has been recorded, paying tribute to the man behind this wonderfully popular musical instrument.

The albums start with a couple rockin' blues songs featuring none other than 93 year old Les Paul on guitar. The first song, "The Good Luck You're Having" features a young blues master named Joe Bonamassa on vocals and guitar. Former "Late Night with David Letterman" guitarist Hiram Bullock performs vocals and guitar duties on "The Walls Came Tumbling Down". This would be his last recorded work as he passed away during the production of this album. Lead vocals on two of the ten tracks on this CD are performed by female artists. The first song "I Don't Want To Be With Nobody But You" is sung by Joan Osbourne. She gives the song a bluesy/r&b feel to the song. The other song sung by a female singer is "Slippin' Into Darkness" by Grammy Award winner Lisa Fischer. Her singing experieince gives this song a more pop/r&b flavor to it. Johnny Rzeznick, of the Goo Goo Dolls, does a "spot on" remake of U2's hit "All I Want Is You".
The highlights of this album are the two instrumentals found in the middle of this CD. "69 Freedom Special" is performed by Les Paul "And Friends". Some of his friendsÊthat helpÊon the song are Hiram Bullock and Barry Goldstein. It also features a sax solo by Edgar Winter that only adds to the groove of the song. The other amazing instrumental on this tribute album is by well-known Gibson guitar player, Slash. His song entitled "Vocalise" is a slow bluesy ballad shows off his softer side. Slash and bassist Abram Laboriel, Sr. trade solos throughout the song. "I Love You More Than You'll Ever Know" is slow blues sung by Simply Red lead singer Mick Hucknall. It also features Joe Perry of Aerosmith on guitar. The final two songs of the album is a great cover of "How Long" featuring jazz guitarist Jeff Golub and a country-blues song "Great Hall of Fame". "Great Hall of Fame" has Richie Sambora (Bon Jovi) performing double-duties as lead singer and lead guitarist.
This tribute album for 93 year old Les Paul shows the passion that these and other performing musicians have for the man and his instrument. This album is available now in stores and online. For more information, please check out http://www.lespaultribute.com/ and www.myspace.com/lespaultribute.
Posted by JP's Music Blog