Return of the Jambands 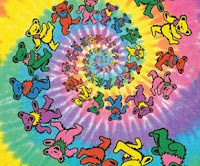 Will 2009 bring the return of the jambands?

It appears so. The year 2009 seems to be shaping up into a great year for fans of the jambands. First off, 2009 will be the 40th anniversary of The Allman Brothers Band. This band has been quietly carrying the torch since the loss of Jerry Garcia disbanded the Grateful Dead. The Allmans have a full slate on their plate, starting with a run of live shows at the Beacon Theatre featuring specials guest performers. That will be followed by a tour and possibly a new studio album.

Since 1995, the Grateful Dead have only played together a handful of times, but recently they reunited to support Barack Obama for president. They played a live show last Monday at Penn State University and have mentioned the possibility of doing a reunion tour. We'll have to keep our fingers crossed for that one.

Let's not forget some of the biggest jamband news to come down the pike in a long time. The reformation of Phish. Phish announced earlier this month that they will be performing a few shows at the Hampton Coliseum in Virginia. This will be their first set of shows since 2004. These shows will be followed by a tour and hopeful a new album of sorts.

Another band that is slowly climbing its way back into the jamband scene is Blues Traveler. After releasing one of their strongest albums in years, they are currently on tour and hope to continue performing into 2009.

And, as long as bands like Umphrey's McGee, moe, Widespread Panic and others continue jamming, it looks like 2009 will be a year to remember. So, breakout your tie-dye shirts and try to catch a show near you.
Posted by JP's Music Blog