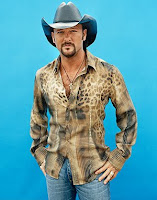 As the first of only two New England area shows, country superstar Tim McGraw came and amazed the audience at the Mohegan Sun Arena. Backed by his regular band, The Dancehall Doctors, Tim McGraw was not there to promote an album, but just to perform for his fans. After these two shows, Tim McGraw will not perform live again until mid-2009.

As his band took their places, Tim McGraw walked out onstage to a deafening roar from the audience. He began the evening with a new song entitled “Still”. Fans automatically accepted it as an old favorite. Tim McGraw proceeded to perform four of his Country Singles chart toppers, “Unbroken”, “Back When”, “Last Dollar (Fly Away)” and “Where The Green Grass Grows”. Tim McGraw was masterful in the way he covered the stage, performing for both the main audience and the audience located behind him. “Kristofferson”, a personal favorite from his latest album and the Ryan Adams’ original “When The Stars Go Blue” prepared the crowd for his biggest single of 2008, “Let It Go”. With a new album just waiting to be released, Tim McGraw proceeded to try out the new songs “Southern Voice” and the slow-tempo “You Had To Be There”.

Getting the crowd up on their feet, he went back in time to one of his earliest singles “Indian Outlaw”. Keeping the crowd rockin’, Tim McGraw finished his set with “Between The River And Me”, “I Like It, I Love It” and one of his most popular songs “Live Like You Were Dying”. Tim McGraw walked off stage to an overwhelming standing ovation that seemed to drown out the sound of the band.

The encore began with an acoustic version of his 2007 hit “If You’re Reading This”. The song takes its lyrics from a letter that a family received only upon the death of a soldier. Being in the Christmas Spirit, Tim McGraw performed the Skip Ewing original, “It Wasn’t His Child”. Tim McGraw and his band then proceeded to pick-up the tempo with fan favorites “How Bad Do You Want It” and “Something Like That” before ending with his 2003 hit single, “Real Good Man”. Knowing what to expect, the crowd was still left in awe by the performance given by this country superstar.

“The hardest working band in country music”, The Lost Trailers opened the evening with “Hey Baby” from their 2008 album, “Holler Back”. With only a quick 30 minutes to play with, they performed their latest single, “How ‘Bout You Don’t” and a cover of John Mellencamp’s “Hurts So Good” among other songs. They finished their set with their Top Ten country hit “Holler Back”. Coming soon to Mohegan Sun is Daryl Hall & John Oates, Lynyrd Skynyrd and Aaron Lewis of Staind. Visit www.mohegansun.com for more information.
Posted by JP's Music Blog