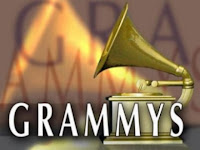 Sunday night saw the biggest awards in music go to many deserving artists and producers. Only ten awards were presented during the telecast. I think the list of awards presented get shorter every year. Before we know it, they will only be presenting one award at the end of the show and just have performances for 3 1/2 hours.

As far as the performances go, most of them were good. Some of the more "stand-out" performances were Jennifer Hudson's emotional version of "You Pulled Me Through" in which she teared up at the end of her song making it much more heartfelt. I especially enjoyed Stevie Wonder performing with the Jonas Brothers on their song, "Burnin' Up", then on Stevie Wonder's classic song, "Superstition". It showed how much more the Jonas Brothers need to learn to reach the immortal status of Stevie Wonder. My favorite performance of the night was by none other than Sir Paul McCartney featuring Dave Grohl of the Foo Fighters on drums performing "I Saw Here Standing There". Dave Grohl gave the song energy with an almost "Punk Rock" drumbeat. I also give Katy Perry props for her outfit and for her use of fruit on stage.

Country superstar Keith Urban performed everything, but country. Was he really needed to perform with Al Green and Justin Timberlake? I understand that the producers had to put something together last minute, so why did they decided to throw Keith Urban in the mix? Another question I had was that did M.I.A. need to be in the spotlight with the likes of Jay-Z, Kanye West, T.I. and Lil' Wayne. I almost felt that the four rap superstars should have put on doctor's scrubs and delivered her baby at the Grammys. I understand that she wanted to perform, but maybe a different outfit and more of a background part would have helped. One thing that the Grammys have taught me was that half of Radiohead performing is better than no Radiohead at all.

As far as the awards, I'm happy that Rick Rubin won "Producer of the Year". He seems to bring out the best of every musician he works with. At least Metallica did win one Grammy for their song "My Apocalypse" in the "Best Metal Performance" category. Scrolling through the winners, it seems that Robert Plant & Alison Krauss made off with more than a few awards. It is a great album and well deserving of the Grammys it won. For a full list of winners, please visit www.grammy.com
Posted by JP's Music Blog