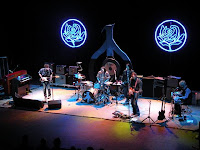 Friday night, Ryan Adams & The Cardinals started their 15-date tour at the Shubert Theatre in New Haven. The band took the stage just after 8:30 and received a standing ovation. Starting out with a fan favorite, "I See Monsters", Ryan Adams did a great job mixing in songs from the band's latest release, 2008's "Cardinology" through his 2000 debut solo album, "Heartbreaker". The band seemed to fly through songs early, touching on newer songs (Fix It & Magik) as well as some of Adams' more popular material (When The Stars Go Blue & Come Pick Me Up). Singer/Guitarist Neal Casal got his moment in the spotlight singing a couple of songs (Grand Island & Freeway To the Canyon) from his 2006 solo album.

The evening had a very "laid back" vibe with the band becoming very talkative with the audience. Even Ryan Adams was in a good mood, especially when his guitar was out of tune for "La Ciengna Just Smiled". The band seemed to mesh together like a well oiled machine. "A Kiss Before I Go" enticed some individuals to get up a dance, but it was the extended jams of "Goodnight Rose" and "Easy Plateau" that left the audience in awe. The night ended with a great version of "Bartering Lines" from Ryan Adams' debut album "Heartbreaker".

As a rumored hiatus looms over the band throughout the tour, they seem to be having fun performing together. Low ticket prices, 2 1/2 hours of music and affordable concession memorabilia was the winning combination to a successful show.
Posted by JP's Music Blog