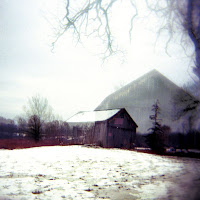 "House With No Home" is the sophomore release from the Portland, Or band Horse Feathers. Singer/songwriter Justin Ringle began writing and recording demos back in 2004. The demos found their way to multi-instrumentalist, Peter Broderick who helped flesh out the songs for the band's debut album, "Words Are Dead". After a year of touring, the band singed with Kill Rock Stars Records to record their follow-up, "House With No Home".

The songs on their second album are very rich with sound with only the basics needed to achieve this goal. "Curs In The Weeds" sets up the layout of the album with its gentle lyrics and strumming guitars. The acoustics of guitar and mandolin quietly begin the songs "Albina" and "Rude To Rile", before the song gets taken over by the haunting vocals of singer Justin Ringle. The harmonizing between Justin and vocalist Heather Broderick really stand-out on such songs as "This Is What" and "Working Poor". The gentle simplicity of the songs "Helen" & "A Burden" puts the listener in a relaxed state of mind. Heather's cello performance in "Heathen's Kiss" gives the song a fuller, more orchestrated sound and fills in the acoustic gaps. The laid-back, relaxed feeling continues through to the end with "Father" and "Road To Ruin".

With the recent success of the Robert Plant-Alison Krauss collaboration, Horse Feathers taps that same vein of Americana music. Horse Feathers really makes you listen and enjoy instrumentation and lyrics of every song on the album. They will be performing live on April 25 at Wesleyan University. Tickets are available at the university box office. Visit the band's MySpace page (www.myspace.com/horsefeathersmusic) for more information about their new album and tour dates.
Posted by JP's Music Blog