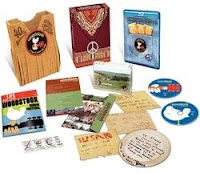 This August will mark the 40th anniversary of the Woodstock festival that took place in Bethel, NY. But the celebration has already begun with the release of a brand-new, newly remastered DVD & Blu-Ray box set of the originally Woodstock documentary. The three-disc deluxe box set will include the four-hour director's cut of the film as well as three more hours of extras including newly discovered footage of The Who, Grateful Dead, Santana, Jefferson Airplane and more. Also included in the set is a 60-page reprint of Life magazine, a Woodstock patch and prints of Woodstock festival posters. If money's a little tight, there is also a 2-disc DVD set of the four-hour director's cut of the film.

Well, if you don't have the time to sit and watch that amazing festival, you can always listen to it. Also being released is a 2CD set of the original Woodstock soundtrack to the film featuring newly remastered sound from the original analog soundboard tapes. Let's not forget the follow-up soundtrack, Woodstock Two, which is also getting the remastered treatment along with bonus songs added.

Coming out at the end of the month is a 10-CD box set called "The Woodstock Experience". This box set contains the entire Woodstock performances of Santana, Janis Joplin, Sly and the Family Stone, Jefferson Airplane and Johnny Winter. Each artist gets their Woodstock performance on a two-discs and it is the first time that these performances are being officially released. Each performance will also be available to purchase separately, but included in the box set are rare photos and 6 posters including the original Woodstock poster.

If you still think that there should be a concert in August at the original site, then you need not worry. The "Heroes of Woodstock" will be performing August 15 & 16 at the original site. The "Heroes of Woodstock" include Jefferson Starship who will be performing Jefferson's Airplane set, along with Canned Heat, Ten Years After, Country Joe McDonald, Big Brother & The Holding Co. and Tom Constanten of the Grateful Dead. Also appearing will be Quicksilver Messenger Service, John Sebastian and Edgar Winter.

So turn back the clock 40 years to the last summer of love in the sixties and enjoy some of the best live music ever created at one monumental festival, Woodstock.
Posted by JP's Music Blog