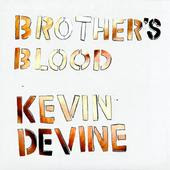 Kevin Devine is arguably one of the best singer/songwriters that you haven't heard of...yet. Kevin and his Goddamn Band recently released their critically acclaimed new LP entitled "Brother's Blood" on the Favorite Gentleman label.

The album starts off with only Kevin Devine and his acoustic guitar. It is an introduction to who Kevin is as a singer/songwriter. His lyrical wordplay is similar to Bright Eyes' Conor Oberst. From the gentle opening of "All of Everything, Erased" 'til the last sounds of "Tomorrows Too Late", Kevin Devine & The Goddamn Band lay it all out to show. In the song "Carnival", the band comes crashing in on Kevin's gentle delivery of his lyrics, showing another dimension of his songwriting. The Goddamn Band and Kevin Devine find their groove on "Another Bag Of Bones" that contains strong, powerful lyrics, screeching guitar solos and a drumbeat that keeps the song moving. The hand clapping "Hand of God" piles lyrics on top of lyrics that draws you in to Kevin's beliefs. At almost 8 minutes long, the epic "Brother's Blood" starts off with a bluesy bass groove before the lead guitarist takes the song to another level that is matched by Kevin's passionate screams. The album slows down with the ballad "Fever Moon" and the acoustic "It's Only Your Life" which leaves the spotlight to the lyrics. "Murphy's Song" has a folksy flow that features some nice harmony singing. The band rocks on "I Could Be With Anyone" and "Yr Husband" before returning to the Simon & Garfunkel sounding closer "Tomorrow's Just Too Late".

Kevin Devine and the Goddamn Band will be performing this Friday, June 5 at the Webster Underground in Hartford. Do yourself a favor and check them out, you won't be disappointed. You can also purchase their new album at the show or online. Visit Kevin Devine's website (myspace.com/kevindevine) for more information about Kevin and his happenings.
Posted by JP's Music Blog