Michael Jackson, The King Of Pop, Dead At Age 50 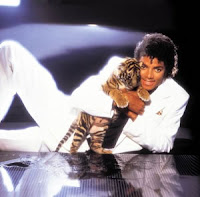 Throughout the late seventies and eighties, Michael Jackson was the meaning of pop music. Whether it was his music, his videos, his dancing or his style everyone knew his name. His songs were pop music masterpieces, his music videos were epic and his dancing was unworldly.

In the early eighties, I, like everyone else, bought a copy of his album “Thriller”. I did not fall in love with the album immediately, but it was the music videos on MTV that put a vision to the songs, especially “Thriller”. The music video for “Thriller” was unlike any other video of its time. It became an event that everyone gathered at the television set to see this short movie. Fans wanted to dance like him, dress like him and even try to sound like him. Even today’s artists try to emulate his style.

He crossed musical boundaries with rock songs like “Beat It” and “Dirty Diana”, featuring some of the best guitarists of all-time. He performed with a Beatle and even owned the copyrights to a number of The Beatles songs. His album “Thriller” is the biggest selling album of all-time and the “moonwalk” has never been duplicated. His place in music history is undeniable. He will forever be known as the “King of Pop”.
Posted by JP's Music Blog