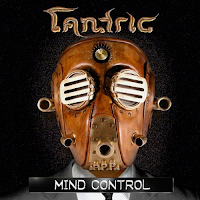 Alternative rockers, Tantric return August 4 with an album of brand new material. The formula that brought them success with last year's "The End Begins" continues with their newest release "Mind Control". The album's title track is already in steady rotation on rock radio.

Begining with the band's first single from the album, "Mind Control" is a hook-filled song with blazing guitars and pounding drums. The lead-off track sets up the listener for what to expect throughout the album. Lead singer, Hugo Ferreira showcases his different vocal stylings as in the gritty rocker "Coming Undone" and then the gently balladry of "The Past Is Dead". The rhythm section of bassist Erik Leonhardt and drummer Richie Monica are a tight unit as showcased in the songs "Fall To The Ground" and "Run Out". Guitarist Joe Pessia grabs the reins in "Kick Back" with ripping guitar solo. The stand-out guitar riff and vocals make "Walk Away" a sure-fire hit. Violinist Marcus Ratzenboeck outperforms on "What Are You Waiting For" by filling in the overall sound of the band. Tantric come roaring back in your face on the albums final two songs, "Let's Start" and the closer "Guiding Me", reminding the listener how hard they can rock.

Tantric will be performing in Connecticut just days before the release of their new album. They will be at the Webster's Underground Theatre in Hartford, CT on Sunday, August 2. Supporting them will be Aranda and Vayden. Go to the band's website (myspace.com/tantric) for tour information, photos, videos and more.
Posted by JP's Music Blog