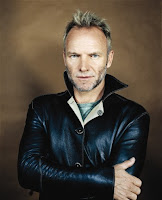 With no new album to promote and no full-fledge tour schedule, Sting performed a greatest hits filled set of his solo material as well as classics from The Police. Sunday night’s show at the MGM Grand Theatre at Foxwoods was only his fifth show of the year and only his third in the U.S.

Sting’s latest touring band is a stripped down 4-piece band that gave new energy to many of his old well-known hits. Drummer Josh Freese played like a younger, more energetic Steward Copeland giving songs like “Synchronicity II” and “Driven To Tears” a punk-style edge to their sound. Guitarist Dominic Miller’s acoustic intros to “Fields of Gold” and “Shape of My Heart” drew big applauses from the audience.

Sting controlled the evening masterfully. Dressed all in white, he demanded the well-deserved spotlight as he conducted the audience through hand-clapping and sing-a-longs. His voice was in top form as he traded verses with crowd on The Police classics “Every Little Things She Does Is Magic” and “Wrapped Around Your Finger”. Dominic Miller showcased why he is Sting’s favorite guitarist with blazing solos throughout the night including an extended guitar solo for “If You Love Somebody Set Them Free”. With an overabundance of hits at Sting’s disposal, he combined songs to please fans. ‘Walking On The Moon” flowed perfectly in “Tea In The Sahara” and the reggae beat of “Bring On The Night” was kicked up a notch to the high-powered “When The World Is Running Down”. The latter song featured an ivory slapping piano solo by keyboardist David Sancious. The climax of the set would come with the ever crowd-pleasing “Roxanne”. Sting himself joked about how many times he has sung this song in his career. The middle break of “Roxanne” featured a funk jam highlighted by scat-style singing by Sting, before finishing with an astonishing end to the song.

Sting would begin the encore with one of his newer hits the 2000 single “Desert Rose” from the “Brand New Day” album. The pulsating beat allowed Sting to dance and shake his hips for the front row. The evening concluded with two of The Police’s biggest hits, “King of Pain” and “Every Breath You Take” and the gentle ballad "Fragile". This left the audience with a performance to remember.

Setlist:
If I Ever Lose My Faith In You
Message In A Bottle
Englishman In New York
Synchronicity II
Every Little Thing She Does Is Magic
If You Love Somebody Set Them Free
Fields Of Gold
Driven To Tears
Seven Days
Walking On The Moon/Tea In The Sahara
Shape Of My Heart
Wrapped Around Your Finger
Bring On The Night/When The World Is Running Down
Roxanne
Encore:
Desert Rose
King Of Pain
Every Breath You Take
Fragile
Posted by JP's Music Blog

Good review - even better show! One correction, he came back and finished the set with one of my all-time Sting favorites, Fragile.

Nigel - Thanks for the heads up. I'm glad you enjoyed the show.

I recently came accross your blog and have been reading along. I thought I would leave my first comment. I dont know what to say except that I have enjoyed reading. Nice blog. I will keep visiting this blog very often.