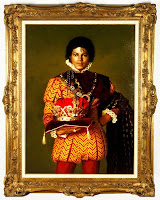 Before his death over two weeks ago, the world had forgotten about Michael Jackson, the so-called "King of Pop". Whether it was because of his unusual lifestyle, his cases in court, or because he has not released a new album in eight years, we tried to pretend that he was a fallen star and that his music didn't fit in today's world.

But, a brief glance of hope came with the announcement of a 50-show event at the O2 arena in London. This was to be the start of a his comeback. The shows sold out in less than 3 hours. But, with rehearsals for the show slowing down production and Michael Jackson unable to find perfection, dates were starting to be cancelled. People were wondering whether or not these shows would go on as scheduled. Once again controversy found its way to Michael Jackson. Would this end up being his triumphant return to greatness or just another disappointment for fans.

While London was feeling Michael Jackson fever, here in the US, things were quiet. It was on a rare occasion that one of Michael Jackson's songs was heard on the radio. His albums were selling at a dismal rate of a few hundred a week. The only time his name was mentioned was in tabloids. Michael Jackson had become a forgotten pop star.

All that changed on June 25. With word of his passing, Michael Jackson memorabilia became a hot commodity. Sales of Michael Jackson records skyrocketed, selling over 100,000 copies just days later. For the past two weeks, his albums have captured the #1 and #2 spots on the Billboard albums chart. Also, radio stations have been playing Michael Jackson songs over 1000% more since before his death. A whole new generation has rediscovered the genius of Michael Jackson. Unfortunately it came at the ultimate price.

While his comeback shows may have been cancelled, his comeback has not. He once again took control of the country when the public stopped for a moment to witness his memorial service. Putting the controversy of his death aside and the battle for custody of his children, Michael Jackson, who was a forgotten star, is once again the biggest musical artist on earth.
Posted by JP's Music Blog