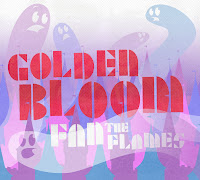 I'll let you in a little secret, Golden Bloom is one of the best bands that you never have heard of . . . yet. Their new album entitled "Fan The Flames" will change all that when it is released on August 18. It's melodic rock melodies and exceptional song writing should give Golden Bloom it's big breakthrough into mainstream music.

The album begins with the keyboard heavy pop song "E.H.M." Right from the beginning, front-man Shawn Fogel wants the listener to relax, "give it a rest, it's not your problem". "Doomsday Devices" is a great alternative rocker that's as good as any of the modern rock masterpieces being played now. The mellow acoustic beginning of "Fan The Flames" gives way to a rock assault with the advice "don't give up, 'til you try again". The tempo of the album slows down with the rock ballad "She Leaves Me Poetry". The heart of the album brings forth the slow burning rocker "The Fight At The End Of The Tunnel". The power pop sounds that are next to come give life to "Dead Petals" and "If You Believe", before getting bookend with the smooth acoustic strumming and organ of "The Mountainside Says". The album closes with the campfire, harmonica highlighted "Theme For An Adventure At Sea".

Clocking in at under 40 minutes, you wish there was more to hear, but something new is discovered with each new listen. Golden Bloom will be touring the Northeast in August. For tour information, music samples and more visit goldenbloom.net.
Posted by JP's Music Blog