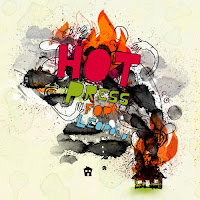 Hot Press For Leopold (HPFL) does not want to bore you with how they met or where they're from, they want their music to talk for them. HPFL is the brainchild of multi-instrumentalist Omar Fadel. He was commissioned to compose instrumental tracks, but instead created a musical portfolio.

Instead of beginning their album with the obvious instrumental "Are You Ready?", HPFL starts their album telling you that you "Can't Stop The Bomb". It's like telling the listener, you can't stop this rush of music that you are about to hear. The song begins with orchestra type violins before being taken over by guitars and a modern rock drumbeat. Almost daring the listener to decipher all this music being thrown at them. "Torturer" and "Don't Be Afraid" have an abundance of music going on within the songs highlighted by an instrument here and there like a xylophone or trumpet. "You Weren't Exactly A Saint" has a rock-abilly drumbeat with a pulsating organ tone, that gets overtaken by guitars and horns during the chorus. The first instrumental on the album, "Fishmarket" seems like an overture from an English play. The repeating chorus of "I I I I Me Me Me Me" gets old fast and takes away from the R&B style of the song. HPFL makes up for it with the mostly acoustic " Barn Burner". The slow rocker, "Two Ships" is the highlight of the album, showing off the talents of singer/songwriter/multi-instrumentalist Omar Fadel. The album ends with the depressing, but passionate "I Recall It Was Brief" and "Drinking Song", which becomes a sing-along.