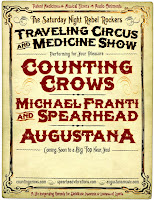 Instead of your typical concert show, the Counting Crows wanted to offer something different for their fans. The concept they came up with was the Traveling Circus & Medicine Show. It included the Counting Crows as well as Michael Franti & Spearhead and Augustana. The idea was that instead of an opening act, everyone would begin the show together onstage. The Traveling Circus and Medicine Show made its way to the Mohegan Sun Arena on Saturday for a night filled with music and more.

The show began with the singers trading verses to Van Morrison’s “Caravan” with Michael Franti receiving the loudest ovation. With all 17 band members on stage, Franti took the lead vocals on “Hello Bonjour” from his 2006 album “Yell Fire!” His performance throughout the evening quickened the pulse of everyone in the arena. As the others bands exited the stage, the Counting Crows began their set with “Mrs. Potter’s Lullaby”. What seemed like a good choice to open with, it lacked the energy left from the two opening numbers. Counting Crows continued with the “all-out” rock assault “Come Around” before being joined by the band Augustana for a sing-along of “Omaha”. Agustana remained on the stage to perform a cover of the Rolling Stones’ classic “Sweet Virginia”, but it would be their original hit “Boston” that drew the biggest applause for the band.

Everyone once again converged onstage for a cover of Peter Tosh’s “Walk And Don’t Look Back” which also included a snippet of “Casey Jones” which was played “for all the Grateful Dead fans in the audience”. The three bands seemed to enjoy the company of one another as smiles decorated the faces of everyone onstage. Michael Franti & Spearhead turned the energy up a notch with some of their original songs “Everybody Ona Move” and “All I Want Is You”. One lucky fan was called onstage to dance along to a cover of Soft Cell’s “Tainted Love”, but it was the song “I Got Love For You” that would find the hearts and souls of audience members. To finish the first set, everyone came together for an all to quick performance of Joe Cocker’s “Delta Lady”.

After a brief intermission, the Counting Crows began the second set slowly with the ballads “Holiday In Spain” and “Long December”. A quick and chaotic version of “Miami” did not bring the energy that the Crows had hoped for in ending their set. That energy was brought on by Michael Franti & Spearhead with a set of their originals. “Say Hey” became the highlight of the set which included the invitation of children to the stage and even a marriage proposal (she said ”yes”). Augustana followed by slowing down the tempo with a cover of Bob Dylan’s “Just Like A Woman” with help on the vocals by Adam Durtz of the Crows. The ballad “20 Years” gave the audience a much need rest before moving onward to the close of the second set. Everyone was joined again onstage for a performance of the Counting Crows’ “Why Should You Come When I Call” and “Hangin’ Around”.

Shortly after the curtain closed, the drum beats signaled the return of the Traveling Circus & Medicine Show beginning the encore with a fun version of Simon & Garfunkel’s “Cecelia”. This was followed by a short acoustic version of Bob Marley’s “Redemption Song” and “Remote Control” with Michael Franti providing the lyrics. The evening ended with one of the Counting Crows biggest hits “Rain King” which included a portion of The Beatles’ “With A Little Help From My Friends” and the Woody Guthrie classic “This Land Is Your Land” . With the energy provided and the amount of songs performed, no one walked away unhappy with that performance.