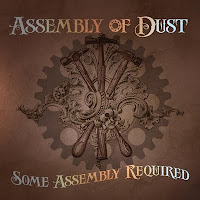 The new album by Assembly of Dust appropriately titled "Some Assembly Required" is refreshing blend of "back to basics" instrumentation and poetic lyrics. If only more bands took this similar approach to making an album. Not only do you get some of AOD's best songs, but each song features a guest musician or singer to help them out. AOD does a great job utilizing the strength of each guest to their advantage.

Beginning with the acoustic folk strumming "All That I Am Now" featuring Richie Havens. The band seems to have fun with the folk legend, daring him to "one up" their performance. The crisp acoustics of "Cold Coffee" get highlighted by the mandolin master David Grisman. The song sounds like an out-take from The Band's "Music From The Big Pink". Guitar virtuoso Keller Williams is featured on the album's lead-off single, "The Second Song". Keller Williams adds his guitar flavor to the song, but I believe more of his talents could have been utilized. The song "Leadbelly" is one step away from country-song glamor. Jerry Douglas' dobro/pedal steel guitar echos Reid Genauer's vocals nicely. Guitarist Tony Rice appears twice on this album, once on "Light Blue Lover" with Grace Potter, who helps out on the chorus. She gives the song a much welcomed soul blues vibe. The other song featuring Tony Rice is "Revelry" which features the electrical vocals of Martin Sexton. These acoustic songs give the album a very laid back, front porch swinging feeling, but AOD also knows how to plug in. The songs "Pedal Down" and "High Brow" feature some exceptional guitar work. These songs could definitely be turned into jams when performed live. One of the biggest names on the album is Mike Gordon from fellow "jam-band" Phish. His addition of bass and backing vocals on "Arc Of The Sun" gives the song a Phish vibe, but not enough to call it an imitation. Assembly of Dust do a great jobs keeping these songs all their own, by not giving in to the styles of the guests, but instead expanding the guests to perform in their style.

This album was released in July 2009 and is available through the band's website as well as itunes and amazon. The band is currently on tour in New England before heading out west in October. Check out aodust.com for more information on this release and more.
Posted by JP's Music Blog