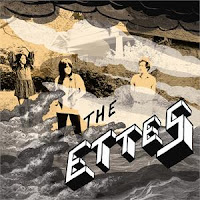 The Ettes released their third album entitled “Do You Want Power” and have also just returned from a successful European tour opening for the Kings of Leon. Their music is raw and upbeat that makes you wanna move. The trio does a great job filling-in the sound while having each instrument sound alone.

The Ettes new album showcases the progress of the band's song writing as their music flows from punk rock to folk ballads. The album's opener, "Red In Tooth and Claw" runs in the same vein of music as the White Stripes and Jack White’s latest band “The Dead Weather”, but The Ettes dare you to “give them a chance”. The band's punk style shows through in "I Can't Be True". The sound is similar to their recent touring partners Kings of Leon. With the first few songs having a familiar sound, the band truly starts to come into their own on “Take It With You”. The chord changes in this song keeps the energy flowing right through to the vocals. The beats of "Blood Red Blood" and "Seasons" give a much needed edge to their songs, while the softer side of The Ettes is also a breath of fresh air. "Love Lies Bleeding", "Keep Me In Flowers" and "While Your Girl's Away" keep the listener focused on the lyrics as the music floats by in the background.

The Ettes are currently on tour in the western half of the United States. Their songs will be featured in upcoming episodes of HBO’s Entourage and in Drew Barrymore’s directorial debut “Whip It”. Their new album is available on itunes as well as at amazon.com. For more information, check out the band’s website www.TheEttes.com.
Posted by JP's Music Blog