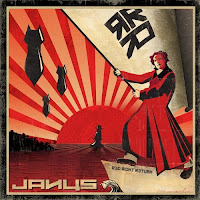 The band Janus hails from Chicago. Studying the hard rock/punk bands of the nineties, Janus has built upon their foundation by adding more to the music than just drums and guitars. Their music feels more mature, intricate and complete as shown on their new album "Red Right Return" released September 22 on Realid Records. The album was recorded, produced and created by the band themselves.

The album's opener "Six Letters Sent" just hits you in the face with its pounding drums and buzzing guitars while David Scotney's vocals flow over the top. The energy of the rhythm section of Alan Quitman on bass and Johnny Salazar on percussion is on full display of "If I Were You". The first single from the album, "Eyesore" shows the band firing on all cylinders. Scotney screams the chorus with unworldly passion. The band's power continues with "Skin Deep" before turning the energy down slightly for the politically charged "Your Arms". Guitarist Mike Tyranski gives "The Nerve" its edge, with Scotney's vocals following his lead. Janus never lets up, finishing their album with the high-powered rockers "Stranger" and "100 Years".

Their music has been featured on both MTV and NBC television shows and has been spreading throughout the airwaves of the radio. A video for the single "Eyesore" is currently available on the band's myspace page. The band is currently on tour in the south and Midwest region of the country before heading to the west coast. For more information on Janus' "Red Right Return" visit the band's website www.janusmusic.com.
Posted by JP's Music Blog

Nice to meet you.

I was going to paste the link without permission because I had very felt the interest for your blog.

Please link me with the blog if it is good.