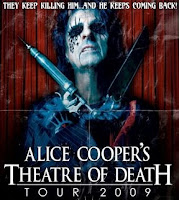 At 61 years of age, Alice Cooper has mastered the art of “dying” onstage. His demonstration of this ability of illusion was spotlighted in his current “Theatre of Death” tour. Cooper’s theatrics are definitely not made for Broadway, but play perfectly to his legion of fans.

As the curtain dropped, the sound of a ringing school bell and lead guitar intro of “School’s Out” blared throughout the MGM Grand Theatre. Cooper’s masterfully planned set list did not shy away from his hits as he incorporated them perfectly into his sequence of “deaths”. His breakthrough hit, “I’m Eighteen” led to the evening’s first “death” scene as one of Cooper’s henchmen/stagehand was speared by a giant pole. The thunder and lightning of “Welcome To My Nightmare” took life out of a dancing bride. Cooper proceeded to dance with the bride’s corpse during “Cold Ethyl”. Back to back 1971 hits “Is It My Body” and “Be My Lover” brought an end to the life of “Nurse Rosetta”. But that evening, even Alice Cooper himself could not escape death’s hand as he was killed on four different occasions throughout the evening. He first met his demise at the conclusion of the “Ballad of Dwight Fry” as his head was separated from the rest of his body by a guillotine. His biggest hit in recent memory, “Poison” led to his second “death” by a needle injection. The ballad “I Never Cry” was sung with a noose around his neck as the stool was knocked out from underneath the singer’s feet, displaying his lifeless body for a moment. Cooper’s band proceeded to take over the stage, performing the instrumental “The Black Widow”, as Alice Cooper would later appear again to shouts of “vengeance” from last year’s song “Vengeance Is Mine”. Cooper’s final “death” of the evening followed the decapitation of a doll’s head during “Billion Dollar Babies”. Forced into a box, Cooper was on the receiving end of sharp swords at the conclusion of his song “Killer”. Alice Cooper reappeared once more to end his 90-plus minute set with the anthem “No More Mr. Nice Guy” and “Under My Wheels”.

The one song encore found Cooper sporting a mirror plated jacket, complete with tails and a top hat. The school bell rang once again as Cooper emerged from a smoke-filled stage to finish the evening with his biggest hit “School’s Out”. The “Theatre of Death” tour has certainly lived up to its billing with no less than 8 separate killings performed that evening to the delight of his fans.

Setlist:
School’s Out
Department Of Youth
I’m Eighteen
Wicked Young Man
Ballad Of Dwight Fry
Go To Hell
Guilty
Welcome To My Nightmare
Cold Ethyl
Poison
The Awakening
From The Inside
Nurse Rozetta
Is It My Body
Be My Lover
Only Women Bleed
I Never Cry
The Black Widow
Vengeance Is Mine
Devil’s Food
Dirty Diamonds
Billion Dollar Babies
Killer
I Love The Dead
No More Mr. Nice Guy
Under My Wheels
School’s Out
Posted by JP's Music Blog

Thanks for the show summary and setlist. 'Twas most helpful....

Setlist is amazing!! Lot's of classic hits, combined with new ones. Id wish to be on this Cooper's gig