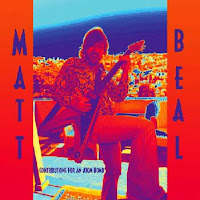 Meriden native Matt Beal has found the success he was looking for, but not here. Growing up, Matt idolized the heavy metal guitarist of the 1980's. As soon as he heard Randy Rhodes peel off guitar chords, he knew that was what he wanted to do. Instead of sticking close to home, Matt was drawn to the California rock scene and his gamble has paid off. Matt released his solo album debut in 2006. It's an album that displays all of Matt's hard work. Written, recorded, produced and released on his own, "Contributions For An Atom Bomb" proudly displays the talents of Matt's guitar abilities.

The album carries a classic rock sound modernized by Matt's singing. Right from the beginning of the opening track "Atom Bomb", Matt's guitar becomes the main focus. "Sabrina" has a Bon Scott era AC/DC sound with the lyrics being belted out as if the ghost of Bon Scott himself was singing. "Awake" carries a Black Crowes swagger to the lyrics. Matt displays his talent as in the hard rock, fuzz guitar of "CuffViMitt" and the 90's alternative "Guarantee". The soul-baring rocker "Things I Don't Need" gives way to pop sounds of "Love's The Drug". With so many different sounds, this album becomes a sampler of Matt's talents as a songwriter and guitarist.

Since the release of his album, things have taken off. He established his own record company called Corporate Anarchy Records. He's performed with a number of well-established artists in the music business. Matt recently played at Cheech Marin's wedding, performing the Cheech & Chong classic "Earache In My Eye". He has also been featured in a couple of coffee table books about music celebrities. But, some of his biggest challenges lie ahead of him. Matt has put the wheels in motion for a music festival. A "sort of" street festival that would feature rock and heavy metal bands from Los Angeles as well some other well established names. He wants the focus of the festival to be about the music and less about the money. Matt is also currently working on his follow-up solo album. He has already written a number of songs and has contacted Mike Inez (Alice In Chains) to perform bass duties for the album. Matt wants to get away from the production aspect of the album and be able to concentrate more on his music and lyrics. Matt notices that "Kids love all the classic stuff on Rock Band and Guitar Hero. That's my sound."

"It's been a real interesting journey out here and a lot has happened", giving Matt some life lessons that I'm sure will be spun together for future songs. For more information on Matt Beal visit myspace.com/mattbealrocks.
Posted by JP's Music Blog