CD Review: Daniel Johnston "Is And Always Was" A Star 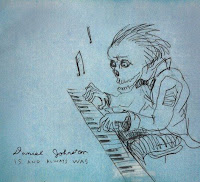 Singer/Songwriter Daniel Johnston has received praise from his peers including Beck, Tom Waits and the late Kurt Cobain for his song-writing. His songs are constructed in such a way that is unlike other musicians of his era. His first studio album in seven year will be released on October 6 and is entitled "Is And Always Was". Daniel Johnston has been recording songs since the early 80s as a side project to his first love, cartooning. As a diagnosed manic depressive, many of his songs come from the dark side of his heart.

Daniel's new album collects 11 of his current masterpieces. As his voice strains to hold a note, the poetry of his lyrics becomes the main focus of his songs. The album does carry a folk-rock vibe. The acoustic side to his songs are displayed in "Mind Movies" and "Tears". The songs provide the listener with simple lyrical storytelling. Daniel Johnston does make a move toward mainstream music with the catchy chorus of "Fake Record of Rock and Roll" and "Without You". The song "Queenie the Doggie" is a fun sing-along about his four-legged friend. "High Horse" is a plead for all those who think they're better to just give others a chance.

Daniel sends out his truthful pleas on "I Had Lost My Mind" and "Freedom". He backs-up his lyrics with electric guitars and steady drum beats that move the songs along briskly. Daniel experiments on title song "Is And Always Was". His singing on this song sounds like a cross between Neil Young and Syd Barrett. The album finishes with his 6-minute epic piece "Light of Day". All of Daniel's emotions pour out into this closing story.

While fame has brought his name and songs out into the spotlight, his song-writing has not swayed from what made him original. Daniel Johnston will be performing in Washington D.C., New York and Boston before heading out west and then over to Europe in November. Go to Daniel's website (www.hihowareyou.com) for more tour information as well as to purchase his new album.
Posted by JP's Music Blog