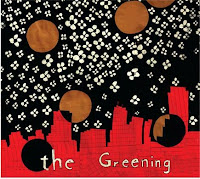 New band, The Greening, are introducing their more mature song-writing skills on a brand-new EP, "(She's So) Electric". While the band prepares their new album for early next year, some new songs have been posted on their myspace page to give fans a direction of the band's latest album.

The Greening's new EP entitled "(She's So) Electric" is full of hook driven lyrics with a modern flair to their sound. The hardest rocker on the EP is the title song, which has a sound similar to David Bowie's Tin Machine. The rest of the EP flows with mix of acoustic guitars and keyboards. "Sunday Afternoon" has a chorus that is repeated to the point of no end. It isn't the strongest song lyrically, but the sound is pleasantly enjoyable. "Belong With Me" has some vocal harmonizing similar to the Beach Boys experimental era with a sound that flashes back to the late 60's/early 70's. "Today, Tomorrow" has a mellow vibe that showcases another side of the band's sound.

Please visit the band's myspace page, www.myspace.com/thegreening, for more information about this new EP and their upcoming album.
Posted by JP's Music Blog