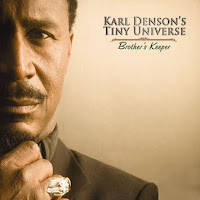 Brother's Keeper starts off with "Shake It Out". The song has a rhythm that sounds like a cross between the Allman Brothers Band and Ray Charles. "Where It Counts" has a funk-style beat that outperforms Denson's lyrics. Only the chorus gets fleshed out by the backup singers. Karl Denson's vocals seem very subdued without the cause for passion. The marching style drumbeat of "The Drums Of War" gets highlighted by the horn section. Karl Denson's lyrics of "Brother's Keeper (Part 1 & 2)" preach without forcing their opinions on you. Meshell Ndegeochello gives the songs life with her bass grooves. "Mighty Rebel" has a sound straight from the 70s funk era with a little raggae vibe. Karl Denson's passion shows through on the R&B flovored "Monica". The funk returns on "Expressions" and "Empty Soul" before closing the album with the R&B "Take It Down" and the modern Jazz-funked "Just Got Paid".

Karl Denson's Tiny Universe is currently on tour and will return to the east coast at the end of month. For tour dates and song samples, visit karldenson.us.
Posted by JP's Music Blog