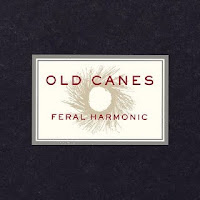 Old Canes is the brainchild of The Appleseed Cast frontman, Chris Crisci from Lawrence, KS. The indie folk sophomore album, "Feral Harmonic" will be released on October 20 on the Saddle Creek label. Their current US tour will make a stop in Connecticut at The Space in Hamden on Wednesday, October 21 to promote their new album.

The music on "Feral Harmonic" jumps right out of the speakers, but the vocals took a back seat in the album's mix. The steady pace of "Little Bird Courage" moves along swiftly with it's marching band drums, but the vocals become just another instrument. The momentum continues right into "The Last Collapse" which features a heavy playing of cymbals. "Trust" finally features some recognizable lyrics that go along nicely with an acoustic guitar. The acoustic guitar returns in "Next Flood" to smooth the edginess of the drum assault . The playfulness of "Sweet" is a nice touch, but once again the lyrics become unrecognizable. The gentleness of "Under" and "Southern Radio" are welcome additions to the drum heavy songs, "I Will Be The Sun" and "Stuck". "Flower Faces" is the most radio-friendly, mainstream song on the album, so enjoy it.

If drums are your thing, then Old Canes new album is for you. But with some much instrumentation going on, it's easy to get lost on the album's collage of sound. For more information on the band, please visit www.oldcanes.net.
Posted by JP's Music Blog

Cool story you got here. It would be great to read a bit more concerning this matter. Thnx for posting that information.
Sexy Lady
Asian Escort