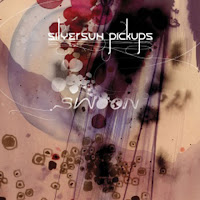 Silversun Pickups make it perfectly clear on their new album "Swoon" that "there's no secrets this year". The band does not hold back on it's dark lyrics or their agressive bass driven sound. Currently on tour, the band will be performing October 20 at the Webster Theatre in Hartford along with Cage The Elephant and An Horse.

The band's sound in the first two songs "There's No Secrets This Year" and "The Royal We" run along the same vein as the Smashing Pumpkins. "Growing Old Is Getting Old" and "Draining" reverts to the band's earlier sound, as lead singer Brian Aubert described as when the band was "too shy to turn up the volume". Not to worry, The band's volume rises on the songs "Panic Switch" with its fuzz guitar sound and "Sort Of" with it's rolling drum beats. The band's current single "Substitution" is a steady rocker that never overpowers the lyrics with a blast of sound.

Silversun Pickups have been nominated for MtvU's "Woodie of the Year" award which is given to the artist that has made the biggest "splash" in the college music scene in the past year. They will also be featured on current TV's six-part show "Embedded". The album has reached #7 on the Billboard Charts and has received positive reviews from critics. The songs "Panic Switch" and "It's Nice To Know You Work Alone" are downloadable tracks for the Guitar Hero: World Tour video game. Visit the band's website, silversunpickups.com, for tour information, news, videos and more.
Posted by JP's Music Blog