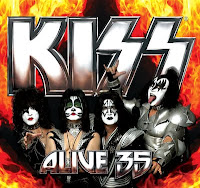 Legendary rockers KISS are on the verge of a major comeback. They have a brand-new album arriving October 6 (exclusively to Wal-Mart stores) entitled “Sonic Boom”. They have also been nominated for induction into the Rock ‘n’ Roll Hall of Fame and their current tour, “Alive 35”, has been selling out arenas everywhere. The Mohegan Sun arena got a little taste of “Kissteria” Saturday night when KISS paid a visit to this Connecticut venue.

A KISS concert cannot be considered just a show, but instead it is more like an event. Members of the KISS Army have waited years to see their idols and on this night, KISS did not disappoint their fans. Explosions, fireworks, fire, blood, flying; you name it, it was part of KISS’ concert. Right from the beginning of the night’s opening song, “King of the Night Time World”, explosions and fireworks rocked the arena walls. The band looked full of energy considering this was their third show in three days. The tour’s main focus has been the celebration of 35 years since the release of KISS’ monumental live album, “Alive!” and KISS brought some special songs along with them. Songs like “I Stole Your Love”, “Modern Day Delilah” and “I Love It Loud” were well-received by fans. “I Love It Loud” began with Gene Simmons’ signature blood spitting routine before he was hoisted to the top of the lights to perform this 1983 hit. Each member of the band received their spotlight solo. Guitarist Tommy Thayer performed his solo during “She” on a smoke-filled stage, playing behind his head and shooting out the lights with his guitar. Eric Singer’s drum solo during “100,000 Years” pushed the song past the ten minute mark. But, it was Paul Stanley who masterfully controlled the audience, whether it was to sing the intro to “Black Diamond” or “stand up for what you believe in” during the confetti shower of “Rock And Roll All Nite”.

Arm in arm, KISS returned for their encore to thank the audience and their legion of fans for such a wonderful night and then proceeded to dive into a five-song encore that started with “Shout It Out Loud”. “Love Gun” found Paul Stanley flying over the audience on a cable to perform the song on a mini-stage at the back of the arena. However, it was the 4th of July style fireworks display at the conclusion of “Detroit Rock City” which left fans in awe of another memorable KISS experience.

Buckcherry began the evening with a 40 minute set that included the Rock Band song “Rescue Me” and their breakthrough hit “Crazy Bitch”. Buckcherry also performed a great cover of Deep Purple’s “Highway Star”.

Setlist:
King of the Night Time World
Deuce
Got To Choose
Modern Day Delilah
Hotter Than Hell
I Stole Your Love
Com’n and Love Me
Parasite
She
Watchin’ You
100,000 Years
I Love It Loud
Black Diamond
Rock and Roll All Nite
Shout It Out Loud
Lick It Up
Let Me Go, Rock ‘n’ Roll
Love Gun
Detroit Rock City
Posted by JP's Music Blog

No Beth, Withouth Beth it is not a complete show.

Nicely said! I think Mohegan Sun is an awesome venue to have a concert, especially since this place is better known for their casino. My only concern however, is the number of fans since Mohegan is not in an urban area. Perhaps this would have drawn more attention if it were in New York City or Boston, not in a rural area of Connecticut.