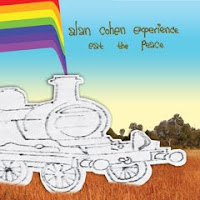 Alan Cohen is not new to the music scene having been involved for over a decade, but his political lyrics have raised the eyebrows of many in the industry. The video for his single "Elephant" became a You Tube hit and he was also featured on CNN's "The Week In Politics" for his video "The Obama Groove". Alan Cohen writes and records on the spur of the moment, but it is when he records his EPs as the Alan Cohen Experience that his talents really shine through.

The Alan Cohen Experience's latest release is a 6-song EP entitled "Eat The Peace". The first two tracks "Rock Biter" and "Train God" show off Alan Cohen's harder rock side. Alan stresses his feelings to the point of almost shouting the lyrics and the pounding drums provided by Genji Siraisi give these song their edge. "Ranger Stranger" runs along the same vein as Van Morrison's "Moondance". The jazzy feel of this song and backup vocals of Catherine Pierce provide a fuller sound to many of the EP's songs. "Jester" keeps the pace of the album going, but seems to miss any potential the lyrics may have provided. The song "Peace" is what the EP was based on as Alan stresses his ideas about peace. The alternative country ballad "Truck Driver" shows off Alan's song-writing skills describing his experiences on the road as he saved his best for last.

Alan's song-writing and use of musical sounds improves with each release this being his third EP in three years. This newest EP will be released on November 3 and is available on his website www.alancohenexperience.com. Alan is also on a tour of New England, visit his website for more information.
Posted by JP's Music Blog

Well… I visit your website first time and found this site very useful and interesting! Well… you guys doing nice work and I just want to say that keep rocking and keep it up!!!!
Why would anybody say it that way, you can easily get your point across in a polite and courteous way. Lets all just get a long.
Sara