CD Review: Fitz & The Tantrums Are Full Of Soul 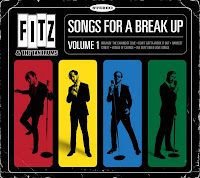 California band Fitz & The Tantrums have released their debut EP "Songs For A Break-Up Vol. 1". The EP was recorded entirely in a living room with one mic, but the music sounds like it was recorded at a studio at Motown Records. The album was influenced by late 60s/early 70s AM radio and believe me, you won't want to turn the dial.

The EP's opener "Breakin' The Chains of Love" features a funky bass groove that gets highlighted with some sax blasts. The R&B flavored lyrics really shine through. The pulsating keys of "Don't Gotta Work It Out" give way to a 70's style soul chorus. The band slows the tempo down for "Darkest Street". Fitz's voice floats on a bed of R&B horns and soul beats. "Winds of Change" carries a hip-hop drum beat. The chorus gets its power from back-up singer Noelle Scaggs. The church organ sound that begins "We Don't Need Love Songs" carries the song through its depressing lyrics sung beautifully by Fitz.

Fitz & The Tantrums are currently on tour with Maroon 5 and will be in Connecticut on November 12th. They will be at Sacred Heart University in Fairfield, tickets are still available. For song samples and tour information, go to the band's website, www.myspace.com/fitzsourmusic.com.
Posted by JP's Music Blog