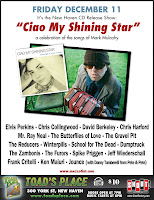 This Friday, December 11 is the New Haven CD Release Show for "Ciao My Shining Star: The Songs Of Mark Mulcahy". Mark Mulcahy was the former front-man of the bands Miracle Legion and Polaris. This album is a tribute to Mark's song-writing and proceeds from the sales of this album will go directly to the Mulcahy family. Mark took a break from his musical career when his wife, Melissa, died suddenly in the fall of 2008. Friends and colleges banded together to pay tribute to Mark and his song-writing by performing songs from Mark Mulcahy's musical career. The album features tracks recorded by Michael Stipe (R.E.M.), Frank Black (The Pixies), Thom Yorke (Radiohead), Ben Kweller, Juliana Hatfield and others.

The CD Release show will be held at Toad's Place in New Haven and will feature musical guests Elvis Perkins, Chris Collingwood (Fountains of Wayne), David Berkeley and others performing the songs of Mark Mulcahy. Doors open at 7PM and admission is only $10. Be sure to pick-up a copy of "Ciao My Shinning Star", but if you are unable to attend the show, the album is available at www.shoutfactory.com and on itunes. For more information on Mark Mulcahy, please visit www.mezzotint.com.
Posted by JP's Music Blog