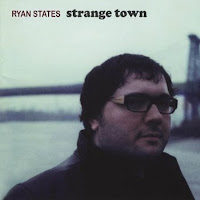 Although Ryan States just released his full-length debut album, I'm sure you've heard him perform before and just did not know it. Ryan States is a musician with the Ringling Brothers' Circus. He performs to over 100,000 circus fans a week, 48 weeks a year. His debut album entitled "Strange Town" was recorded almost entirely on the train at a train yard near you.

"Strange Town" begins with just Ryan and a piano before the ballad grows in music and meaning. "I Will Find My Way" is a blues sounding pop-ballad that finds oneself singing along to the chorus. The song structure of Ryan's songs start out simple with just himself and an instrument and by the end of the song, it sounds like an orchestra was invited to join in. Songs like "In The Game" and "Planet Earth" display Ryan's wonderful talent of song-writing. Others like "Under The River" and "Better (When You're Older)" has a very Beastlesque feel to the music and lyrics. The album closes with the inspirational "I Won't Walk Away".

While almost all of the instruments were performed by Ryan himself, he did receive help from nearly two dozen friends and strangers throughout the country. Ryan also hosts a podcast (www.ryanstatespodcast.com) of his musical adventures on the road. Check out Ryan's website (www.ryanstates.com) for information on obtaining a copy of his newly released album.
Posted by JP's Music Blog