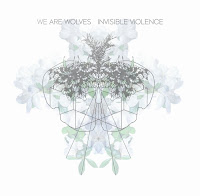 The new album by Canadian trio We Are Wolves entitled "Invisible Violence" was released earlier this month. Their mix of electro-funk rhythms and pulsating rock beats is what makes We Are Wolves standout among the artists of today.

Beginning with "Paloma" you get a taste of how keyboard friendly We Are Wolves can be. The sound is very experimental, like an overlooked riff from Jack White's songbook. "Holding Hands" drops the keyboards in favor of a great punk sound, but the keyboards return in the atmospheric "Walking Commotion". The band does hit a more mainstream vibe with the songs "Dreams" and "Blue". The combination of keyboards and their signature punk sound come together in the song "Me As Enemy". The song landscape of "Reaching For The Sky" run along the same musical vein as some of Peter Gabriel's experimental pieces.

Comparisons to the group TV on the Radio can be made, but We Are Wolves add elements of punk, pop, dance and funk to their resume. Known for their explosive live shows, We Are Wolves have won numerous Canadian awards including "Artist with the Greatest International Potential". The band will be performing in March at the SXSW Festival in Austin, Texas before heading over to Europe in May. Their new album is available on Dare To Care Records and is available online. Please visit wearewolves.net for more information.
Posted by JP's Music Blog