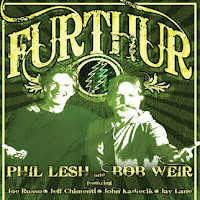 The evening’s first set, which lasted about 85 minutes, got off to a slow start. Feeling each other out, the band jammed into the mostly instrumental opener, ”The Other Ones” that led into a quick version of “Alligator”. Highlights from the first set included a roaring version of “Tennessee Jed” which finally got the sea of people dancing in the aisles. A reggae beat showed up periodically during their cover of Bob Dylan’s “Stuck inside a Mobile with the Memphis Blues Again.” Bassist Phil Lesh, who will turn 70 in two weeks, performed bass duties like a performer with something to prove. The unexpected addition of “El Paso” gave a little Mexican flair to the set. Bob Weir’s voice sounded strong after a night off especially during the set closer, a cover of Harry Belafonte's “Man Smart (Women Smarter).”

After a 45 minute intermission, the second set started off strong with favorites “Bertha” and “Good Lovin” as fans scoped out their own piece of the arena to dance on. The band slowed things down with a heart-wrenching version of “He’s Gone” as the ghost of Jerry Garcia watched over his band mates. Much of the second set was overstuffed with music as the band wove in and out of the songs “King’s Solomon’s Marbles” and “Standing on the Moon.” The deadhead community would rise again for the set closer “Sugar Magnolia” which found Weir conducting the band through the jam.

Before the band returned for their encore, Phil Lesh grabbed the attention of the audience for a moment for a quick word on benefits of being an organ donor. The band closed the evening with an energetic version of “U.S. Blues”. As fans poured out the arena, one could see that the deadhead community was alive and well.

Set One: Jam > The Other One > Alligator > Tennessee Jed, Stuck Inside of Mobile with the Memphis Blues Again, Loser, Pride of Cucamonga, El Paso, Foolish Heart, Man Smart (Women Smarter)