Ladies Night at the Grammys 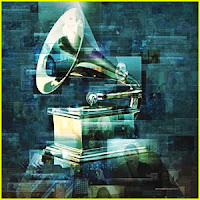 The 52nd annual Grammy Awards belonged to the ladies. Taylor Swift won four awards including the coveted "Album of the Year". Beyonce won a record-breaking six Grammy awards and even Lady Gaga took home a couple of her own. But, it was the lady who took home no Grammys that was the best performer of the evening. Pink's high-flying performance of her song "Glitter In The Air" was the most innovative and attention-grabbing part of the evenings events. I also enjoyed watching performances by Beyonce and the Zac Brown Band. It good to see that Leon Russell is still alive and well. I'm not sure if the biggest competition of the evening was for a Grammy award or for the largest stage ensemble between Green Day and the Dave Matthews Band. I didn't care much for the evening's musical finale with Eminim, Lil' Wayne and new-comer Drake. The music cutting out every 30 seconds because of censoring is not my idea of entertainment, but I did enjoy the very brief flashback to 1986 with Bon Jovi's "Livin' On A Prayer".

Now you saw what awards were handed out during the telecast, but here are some winners that you might have missed. In the battle of rock legends in the Solo Rock Performance category, Bruce Springsteen brought home the Grammy for his album "Working On A Dream". It was good to see Heavy Metal gods AC/DC and Judas Priest each win Grammys in their respective categories. Former member of The Band, Levon Helm, beat out Wilco, Bob Dylan and Willie Nelson for the Best Americana Album Grammy award and Brendan O'Brien (AC/DC, Pearl Jam, Bruce Springsteen) won the Top Producer of the Year Award.

Hopefully next year's Grammys can include a little more of the rock element in their performances,but I do like the innovation and imagination being explored with each indiviual performance. Congratulations to all the winners for their wonderful efforts and talent and for giving the others something to strive for.
Posted by JP's Music Blog