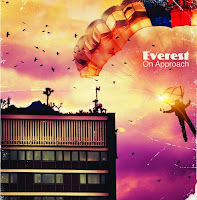 Los Angeles band Everest are on the verge of releasing their sophomore album “On Approach” and are already on tour in support of it. The band currently joined Minus The Bear for a 28-date tour that kicked off in Spokane, WA on April 19 th. The tour will make stops along the east coast on April 30th at the Webster Theatre in Hartford, CT and on May 5th at the Wilbur Theatre in Boston, MA. The tour will conclude at the Bonnaroo Festival on June 13th.

The lead-off single, “Let Go” from the band’s new album carries a thumping beat that becomes the backbone of the song. The lyrics are simple and catchy enough to make an impact on alternative radio. Everest dive right off into the deep blues with “I’ve Had This Feeling Before” as the bass lines of Elijah Thomson jumps all around Dave Latter’s drumming. The band sways between radio friendly hits like “Keeping The Score” and “Tall Buildings” and the experimental rocker, ”House of 9’”. The songs “Dots” and “Unfortunate Sea” show a lighter side to Everest’s sound. The former song give off an almost a lounge-feel to the melody, while the latter’s acoustic harmonizing is a nice addition to the album. “Fallen Feather” shows another dimension to the band’s overall songwriting and how it's progressed since their debut album. The hidden gem on the album is the song “The Rush” with its storied lyrics and relaxed sound. The album closes with the pounding drums of “Catalyst” highlighted by some slide guitar.

“On Approach” will be released on May 11th. Vist everestband.com to find where to pick up the new album and for a complete list of tour dates so you can check this rising band when they visit in your area.
Posted by JP's Music Blog