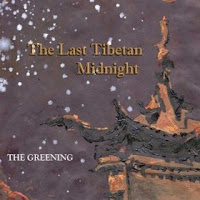 Indie-rock band The Greening return with their latest release "The Last Tibetan Midnight" which came out in February on Zai Records. Last year, the band released an EP to bridge the gap between albums that caught the attention of fans and critics alike. A video was also produced for the single "Sunday Afternoon."

The overall sound of the new album reflects what Brian Wilson and the Beach Boys were attempting to achieve with their experimental sounds and harmonies. On the album's opener "Black Lotus", the band tries to throw in everything they know to play to see what sticks. The song seems more like just a collage of sounds to grab the listeners attention. The aspirations of "Belong With Me" sound like a valid attempt of a timeless love song. The Greening's strongest talents are their clever song-writing (The Tangerine Floating In Ink) and their strong harmonies (Winter Sunshine). It's unfortunate that their best songs are near the end of the album. The single "Sunday Afternoon" has all the makings of a radio hit, with its steady beat and catchy lyrics. "(She's So) Electric" is the best rock song on the album. The lyrics and music just blend perfectly together. The album closes with the slow moving, 11-minute "Thought I Told You" which displays a Pink Floydian sound. Another great song, but seems a bit out of place on this mostly pop album.

For more information on The Greening and their new release, visit the band's website (www.thegreening.com) and myspace page (www.myspace.com/thegreening).
Posted by JP's Music Blog