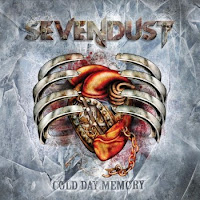 Hard rockers’ Sevendust have just released their new album entitled “Cold Day Memory” on April 20th. Recorded by Grammy nominated producer Johnny K (Disturbed, Staind, 3 Doors Down), the album took over 8 months from start to finish and is the bands most complete work to date.

Sevendust come roaring right out of the gate with the album’s lead-off track “Splinter.” The heavy drumming and hard, crunching guitars prove why Sevendust is considered one of the best metal acts in music today. In the song “Forever,” Lajon Witherspoon’s vocals get pushed along by the drumming of Morgan Rose. The duel-guitar attack provided by John Connolly and the newly returned Clint Lowery along with it’s sing-along chorus and harmonizing is why “Unveiling” became the band’s highest charting single debut ever. The song “Last Breath” continues the formula that works so well for these hard rockers who have broken through to the mainstream. The power that Sevendust puts out is felt through the speakers during the songs “Ride Insane” and “Hear and Now.” Once again Lajon’s vocals shine through on the songs, “Confessions” and “A Better Place.” The closing song, “Strong Arm Broken” bookends the album with one of Sevendust’s heaviest songs.

Sevendust are currently on tour promoting their new album and are making their way up the east coast. “Cold Day Memory” is available now and comes with a DVD that includes some behind-the-scenes footage of the making of the album. For more information on Sevendust’s new album and tour, please visit www.sevendust.com.
Posted by JP's Music Blog