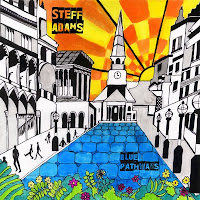 Singer/songwriter Steff Adams just released his solo debut album titled "Blue Pathways". This unsigned solo artist is no stranger to the music industry. His bands have toured across the U.K., opened for The Sterophonics and performed at the Glastonbury Festival. But as Steff Adams ventures on his own, you'll hear strong references to many of his influences including James Taylor, Jackson Browne, Elliot Smith and of course The Beatles.

The album does not stray far from his comfort of an acoustic guitar, overdubbed harmonies and minimal drums. His songwriting is the key ingredient that makes these songs more than just a one-off listen. "Misunderstood" follows in the footsteps of Crosby, Stills & Nash, while "Gonna Have To Last" shows some signs of influences from The Kinks. You can feel the gentleness in his voice in the songs "Too Long Losing" and "A Little Bit Of Something Else". The songs "Into Orbit" and "That I Have Found" show off Adams' talent for portraying the different moods of his lyrics.