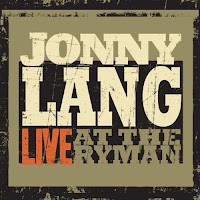 At 29 years old, Jonny Lang is veteran artist. He released is first blues album when he was 14 years old and hit it big with his multi-platinum album "Lie To Me" when he was 16 years old. Jonny Lang won his first Grammy award last year and has toured with such legends as the Rolling Stones, Aerosmith, Buddy Guy, B.B. King and others. On April 20, Lang will release his first live album entitled "Live at the Ryman" recorded on his 2008 summer tour.

On "Live at the Ryman," Jonny Lang comes roaring out of the gate with three songs from his Grammy winning album "Turn Around." The songs don't stray much from their studio versions, but Lang's voice gives off more passion for the lyrics in this live setting. His five-man backing band polish off the songs nicely with their harmonizing background vocals. Lang settles into the deep blues on "A Quitter Never Wins", before slowing things down with the 10-minute run through "Red Light." Chants of "everything's gonna be alright" provoke an electrifying solo from Lang. The funk sound of "Don't Stop (For Anything)" brings the tempo back up and continues into "Thankful" as Lang trades vocals with percussionist Jason Eskridge. The gentle acoustics of "Breakin' Me" show off Lang's softer side before finishing with an fiery version of his hit song "Lie To Me."

Jonny Lang just finished a month of shows in March on the Experience Hendrix Tour, playing along side Joe Satriani, Eric Johnson and Kenny Wayne Shepherd. His live album will be released on Concord records and will be available in online and in stores on April 20. Visit www.jonnylang.com for more information.
Posted by JP's Music Blog