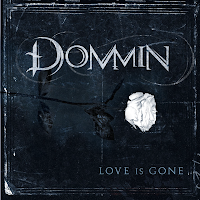 Earlier this year, Goth-rockers Dommin released “Love Is Gone”, their first full-length album on Roadrunner Records. The band is finding success with the album’s lead-off single “My Heart, Your Hands” with its hard rock sound and deep lyrics. Six of the album's fifteen songs were taken from the band’s independent debut “Mend Your Misery.” Songs like “Tonight, “Without End” and “One Feeling” benefited from being remixed or re-recorded for the new album. The song “Dark Holiday” shows off the band’s playful side with a cabaret-type piano leading up to a pounding chorus and screaming vocals. Lead singer and songwriter Kristofer Dommin shows his pain in the songs “Closure” and “Making The Most.” The album closes with the powerful ballad “Remember” produced and mixed by Dutch DJ Junkie XL

Dommin are currently on tour in the northeast in support of H.I.M. They will head over to Europe at the beginning of June to perform at the Rock Am Ring and the Download Festival. Their new album “Love Is Gone” is available now. For more information, please visit the band’s website www.dommin.com and their record label’s site www.roadrunnerrecords.com.
Posted by JP's Music Blog