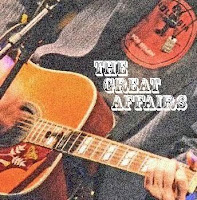 The Great Affairs hail from Nashville, TN and prove why Nashville is one of the hotbeds of the nation for new talent. Their sound is simple, but effective and draws you into what they’re saying. Pop, Folk, Rock, Americana; The Great Affairs cover them all.

Right from the album’s lead-off song “Dodge,” The Great Affairs draw strong references to the band Wilco. Denny Smith’s straining vocals play perfectly to the band’s Americana Pop sound. The music of “Dear John” and “Undertow” sound like Tom Petty & the Heartbreakers outtakes. The acoustics of “Break Me Down” and “Isn’t She Gold” helps you concentrate on the song’s strong lyrics. The music of the album flows so smoothly that you keep wanting more and more as each song is as well-written as the one before.

The Great Affairs self-titled debut is available now and the band will be making appearances in June and August. Check out myspace.com/thegreataffairs for tour dates, music samples and more from The Great Affairs.
Posted by JP's Music Blog