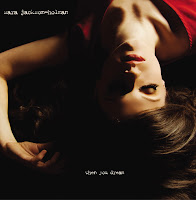 Newcomer Sara Jackson-Holman has garnished comparisons to the likes of Norah Jones, Adele and Feist, but this 21 year old singer/songwriter wants to be known for more than just another female pop singer. Her album only came to be by chance. She attended a concert one night for the band Blind Pilot. The next day she left a message on their myspace page and their record label spotted her, heard some of her music and the rest is brief history.

Sara Jackson-Holman’s debut album will be released on May 25th on Expunged Records. The album carries an array of musical styles ranging from Americana, “Come Back To Me” to the dance pop sounds of “Cellophane.” The album’s title song “When You Dream” and “California Gold Rush” have Sara exploring the studio with a simple subtle beats, highlighted by the striking of piano keys. Her classical piano training can be heard throughout the album and becomes the main focus of the songs “Red Ink” and “Maybe Something’s Wrong.” Her voice just wraps around the tempo of song and portrays a picture in your mind as to what the song’s lyrics mean.

Sara Jackson-Holman could be the next face of modern pop music. Her sound can be described as Lady Gaga simplified. She lets her voice and piano carrying the song’s mood and lyrics without adding any more unneeded music. Visit Sara Jackson-Holman’s myspace page to sample some of her songs and to find out how to obtain a copy of her new album.
Posted by JP's Music Blog