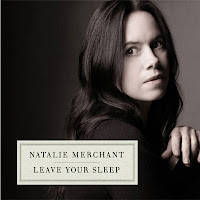 It has been seven years since we last heard from the former 10,000 Maniacs lead singer, Natalie Merchant. Her new album entitled “Leave Your Sleep” seemed like an odd concept at first. The album brings to life children’s fairy tales from 19th and 20th century English and American authors such as Charles Causley, Edward Lead and Mother Goose, but, a children’s album this is not.

There are two versions of this release, one is a 26-song double album and the other is comprised of only 16 of those songs. While the storytelling is wonderful, it’s Merchant voice that becomes the focus of the songs like the folk sounds of “Nursery Rhyme of Innocence and Experience” and “Calico Pie”. Over one hundred musicians were brought into the making of this intriguing album. Natalie Merchant swings between the waltzes of “The Man in the Wilderness” and ”The Dancing Bear”, the jazzy “The Janitor’s Boy” and the reggae-taste of “Topsysurvey-World”. While all of these songs will not appeal to the pop radio audience, Natalie Merchant makes these song fun and more interesting with every listen. Her wordplay in “Bleezer’s Ice Cream” is wonderful and the way she tells a story as in “Adventures of Isabel” keeps you interested. Her voice shines the brightest on the songs with the least amount of instruments like in the songs “If No One Marries Me” and “Maggie and Milly and Molly and May”.

The album was released in April and debuted at # 17 on the Billboard Top 200 Albums Chart and #1 on the Billboard Folk Albums Chart. Natalie Merchant is currently on tour in Europe. She will be performing in the U.S. at the beginning of July. For tour dates and album information, visit www.nataliemerchant.com.
Posted by JP's Music Blog