CD Review: Against Me! Sends A Message With "White Crosses" 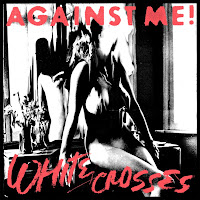 The music on Against Me!'s latest release "White Crosses" is contagious with its steady drumming and bass line grooves, but the lyrics have a message about society today. The album's first single "I Was A Teenage Anarchist" has a clean punk sound with a message to hold on to your dreams "when you were young." Singer Tom Gabel's vocals sound strong throughout the album, especially in the songs "Because of Shame" and "Suffocation." Against Me!'s late-nineties punk sound shines through on "High Pressure Low" and "Rapid Decompression."

"White Crosses" is Against Me!'s second release on Sire Records and was produced by Butch Vig (Foo Fighters, Green Day). The album was released as a standard CD and a limited edition CD that includes 4 extra songs from the "White Crosses Sessions." Against Me! are currently on a 31-date US tour that began at the Bonnaroo Festival and continues through July. For a complete list of live dates and album information, visit www.againstme.net.
Posted by JP's Music Blog