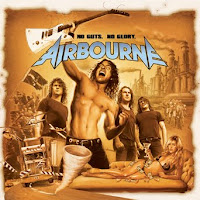 Australian rockers Airbourne are one of the bands that are carrying the torch for rock ‘n’ roll music. The band’s latest release, “No Guts. No Glory.” is full of AC/DC guitar riffs and screaming vocals. “Born to Kill” and “No Way But The Hard Way” are the rock anthems for this generation with Joel O’Keefe’s vocals driving the sound. Songs like “Blonde, Bad and Beautiful” and “Raise The Flag” get embedded in your mind with there repetitive chorus that keep you singing after just one listen. The band speeds things up with the songs, “It Ain’t Over, Till It’s Over” and the album closer “Back On The Bottle.” This album is so full of hard rock energy that you feel you can take on anything. As they say, this album is all killer and no filler.

Airbourne are currently on tour in Europe before returning to the US in August to join the Rockstar Energy Drink UPROAR Festival with Avenged Sevenfold, Disturbed and others. “No Guts. No Glory.” is available now on Roadrunner Records. Visit the band’s website (airbournerock.com) for more information.
Posted by JP's Music Blog