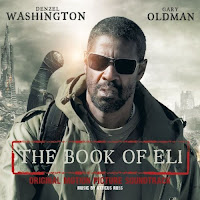 The soundtrack to the movie, The Book Of Eli, is a landscape in sound. Released back in January to coincide with the release of the film in theaters, the soundtrack performs its expected duties, capturing the mood and feelings from specific moments in the film.

Synthesizers become the main backdrop to capture the mood of the movie. The aptly titled opener "Panoramic" scans the talents of film composer Atticus Ross. The orchestra is almost undetectable until the 3rd song "The Journey". Ross does a fine job in making this soundtrack hold together as a solid piece of musical exploration. Musical excerpts "Solara Violated" and "Human" benefit with the use of headphones to really appreciate the stereo sounds flowing through the speakers. The tone of the soundtrack turns dark with "Den Of Vice" and "Gattling" before returning with the powerful "Convoy Destruct" and "Carnegie's Demise".

The soundtrack doesn't stray far from its moody overtone, but plays perfectly as an extension of the film. The soundtrack to The Book Of Eli is in stores now and look for the DVD to arrive on June 15.
Posted by JP's Music Blog