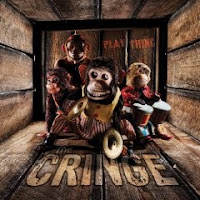 The Cringe released their latest album "Play Thing" earlier this week. Recorded with longtime engineer Steve Hardy (Vertical Horizon) along with input from producer Steve Lillywhite (U2, Dave Matthews Band, Phish, XTC) it is the band's most accomplished record to date.

The album's lead-off track "Ride" finds the right combination from singer's John Cusimano's lyrics and the band's aggressive, energetic sound. The maturity of the band is felt in the songs "Weary Me", the gentle "In The End (We All Are The Same)" and the speed and power of "Where It Hurts." The radio-friendly songs "No Control" and "Knee Deep" should attract more listeners with this album. The band shows its diversity with the power ballad "When I Stay Home," the build-up rocker "Poison" and the punk sounds of "Friends & Family."

The Cringe currently have dates booked along the east coast into September. Look for the band's new album "Play Thing" available now on Listen Records and visit The Cringe's website www.thecringe.com for more information.
Posted by JP's Music Blog