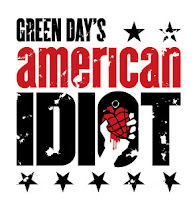 One of the latest Broadway shows to make an impact is "American Idiot" featuring the music of Green Day. The musical is made from the songs from Green Day's last 2 Grammy winning studio albums "American Idiot" and "21st Century Breakdown." The soundtrack to the Broadway show was just released on Reprise Records and comes in either the full 2-CD show or a single highlights CD.

First off, Green Day performs all of the music on this soundtrack, but their voices are nowhere to be found, except for a newly recorded song "When It's Time" found at the end of the album. The voices of these hit songs are supplied by the cast of the Broadway musical. The songs are not new to fans of Green Day, but with a cast of trained singers performing the lyrics, they add an extra punch to the song's storytelling lyrics. The punk-style grit of Billy Joe Armstrong's voice is missing, but the voice of Stark Sands does a more than adequate fill-in as the role of Tunny. As an extension of Green Day's musical legacy, you'll be more than satisfied with the outcome of the smash Broadway musical and the soundtrack only enhances the experience.