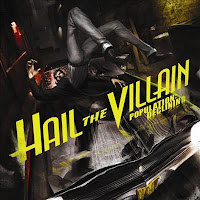 Canadian rockers Hail The Villain have just released their debut album "Population: Declining" on Roadrunner Records. The band holds nothing back as the album is filled with pure hard rock energy.

The single "Take Back The Fear" sets the stage for an assault in sound. Bryan Crouch's vocals are strong throughout the albums' 12 tracks as the band follows suit in "16 Cradles" and "Evil Has A Name." The energy of "Try Hating The World" is hard to ignore. The song "Swan Dive Suicide" features deep, dark groove as the band follows the musical layout of Black Sabbath. The closing song "Social Graces" just pulsates rock and keep you wanting more.

Hail The Villain have just finished a run of shows in Canada before joining the Rockstar Energy Drink Uproar Festival in August. Check out the band's website (hailthevillain.com) and myspace page (myspace.com/hailthevillain) for dates, information and gear featuring the artwork from Rune Entertainment and bassist Chad Taylor.
Posted by JP's Music Blog

The debut album of the villiam is going to rock. And it is going to one of my favorite track list. I a am very much eagerly waiting for that.

So you have a nice idea such that while reading your blog we can also enjoy listening some independence music.

One of my favorite tracks which I listen is from the debut album of the viliam. Everyone must listen that so as to enjoy fully.