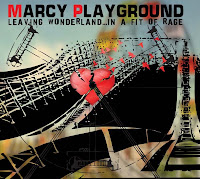 Marcy Playground hit it big in 1997 with the song "Sex & Candy" from their debut album. Since then, the band has tried to recapture that notoriety with minimal success. After their sophomore slump "Shapeshifter," they released the album "MP3" in 2004. After some minor comeback success, Marcy Playground released "Leaving Wonderland...In A Fit Of Rage" in 2009.

The album begins with the lead-off single "Blackbird." Fans will be happy with the band's sound as they stick close to their roots of success. The passion front-man John Wozniak has for this record is felt in the songs "Gin And Money" and "Emporer" containing some of the album's most powerful vocals. The songs "Star Baby" and "I Must Have Been Dreaming" have a sweet, playfulness quality to them. The gentleness of "Irene" and "Good Times" are welcome additions to the band's overall alternative sound. "Memphis," originally released as a b-side, was resurrected for this album and is the strongest song on the album. The stripped down acoustic sound brings out the song's wonderful lyrics.

Marcy Playground will be performing at the Alive At Five in Stamford, CT on July 1st. Also fans can expect an album of "b-sides" and previously unreleased songs expanding through the band's entire 13-year career to be released later this year. For a full list of tour dates and information, check out the band's website www.marcyplayground.com.
Posted by JP's Music Blog