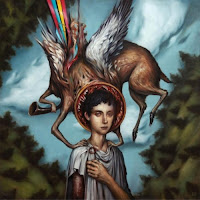 Circa Survive are entering their sixth year together and are finally getting the recognition they deserve. Their latest album "Blue Sky Noise" reached #11 on the Billboard music charts and the band have just finished a mini tour with Coheed and Cambria and Torche.

The new album begins with the steady rocker "Strange Terrain." Guitarists Brendan Ekstrom and Colin Frangicetto gives us a little glimpse of their skills during the lead-off track. The band picks things up on the album's first single, "Get Out" with lead singer Anthony Green screaming the chorus. The soundscapes between songs brings the songs together and makes the album feel like a complete work of art, instead of just singles thrown together. Green opens his heart on the song "I Felt Free" and then pleads for forgiveness in "Imaginary Enemy." These songs are a testament to how far their song writing has come since the band's first EP "The Inuit Sessions." The song "Frozen Creek" puts the band's passion on full display, while "Fever Dreams" and "Spirit Of The Stairwell" shows off another side of the band simplifying their sound.

Circa Survive will be heading over seas in July after performances at this year's Bonnaroo Festival and Pacsun Summer Solstice Beach Ballyhoo Event in California. The band's new album was released in April on Atlantic Records and comes in a standard or deluxe edition. The deluxe edition adds four songs performed acoustic at the Safe Camp Sessions. For more information in Circa Survive, please visit their website www.circasurvive.com.
Posted by JP's Music Blog